It is astounding what we nowadays consider entertainment. This maybe news to some, but a kid misbehaving with adults is NOT CUTE.

His first video shows him misbehaving with his teacher in a very badtameez manner.

And the teacher, instead of correcting him, is prolonging the interaction between chuckles.

Since then a lot of show have featured him and tried to create situations to incite his anger so that he misbehaves while the camera is rolling meanwhile the audience laughs and applauds. Pathetic to say the least.

Is this really funny? Or cute?

Should he not instead be reprimanded for this and taught that this is no way to speak to anyone, especially adults? Let’s not even get into the psychological impact it will have on the child who is being laughed at and jeered, after all being famous comes with a cost. And while we are at it, let’s go ahead and teach other kids to copy the badtameezi and endorse it all in the name or TRPs.

So, basically we are on a witch-hunt for all male adults misbehaving with women (which btw is a trait that develops as a kid, and you don’t have to be a psychologist to know that), and are giving a free pass to children in the name of entertainment. Do you not see anything wrong with that, media?

Why is it so difficult for us to recognise abuse in our society? Normalising a vice does not make things okay. It, in fact, makes way for bigger problems. 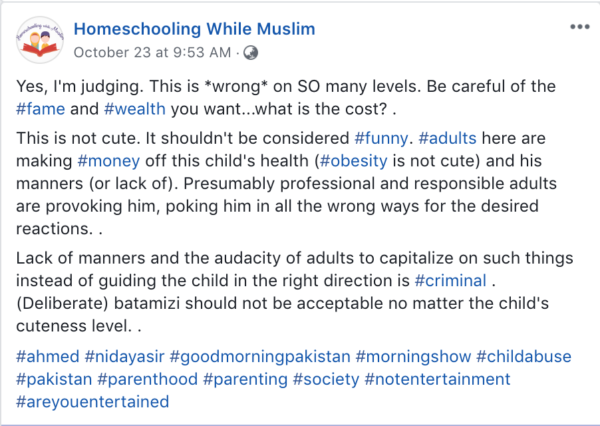 Watch the videos and again. Now, imagine if this was a grown guy talking to the hosts exactly like this. Let that sink in.

0
14 shares
Gulabo wields the sword of communication, branding, and marketing. She is an expert in judging and analysing the dos, don'ts and how-tos. She occasionally likes to make sense too.